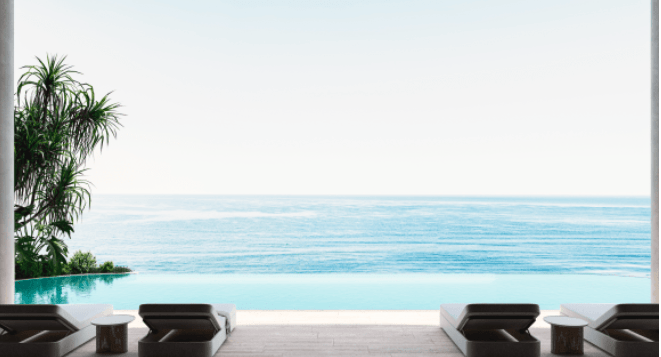 After over 12 months of a rigorous design process, KTQ are announcing Serēn, a hotel and apartment tower in one of the best spots in Surfers.
It’s a development that’s been over two decades in the pipeline, and it’s set to provide local and interstate prestige apartment seekers, and even tourists, something the Gold Coast hasn’t seen before.
It was before the turn of the Millennium that the family behind the luxury hotel operator and apartment developer, KTQ, led by the visionary developer Peggy Flannery, started buying apartments on the dress circle Garfield Terrace, fronting Surfers Paradise beachfront. KTQ has now amassed a huge 2,000 sqm corner site.
And now, after over 12 months of a rigorous design process, KTQ, who are behind the likes of Elements of Byron Bay and the Kirra Point development in Coolangatta, are announcing Serēn, a hotel and residences tower in one of the best spots in Surfers.
Serēn (pronounced serene), will comprise an independent luxury, 60-room hotel, with some suites offering over 100 sqm of living space. The hotel will occupy levels three to six, then above is the hotel and the residences pool and recreation decks. Then above the level nine wellness level are the 60 residences, the smallest on offer spanning a huge 350 sqm and offering three-bedrooms and a multi-purpose room.
Toward the pointy end of the 42-level tower will be full floor apartments and a special two-level penthouse.
The second level, above a new oceanway and fronting the beach, will feature a world class restaurant and bar, with gun-barrel views over the beach and the ocean and south to Coolangatta.

“Serēn furthers KTQ’s commitment to developing a legacy of superior properties that align with our values and aspirations,” KTQ Director Peggy Flannery said.
“We are delighted to be creating something truly inspired for this site with this exceptional team we have assembled.”
Serēn is the brainchild of Little Boat Projects, the design-led studio headed by architects Michelle Donnelly and Mark Damant, who worked with the national architecture firm Bates Smart, the first Gold Coast project for the renowned practice.
Speaking to KTQ’s Development Director Jeremy Holmes, it’s evident KTQ and the design team has considered every little detail.
There will be little to no crossover between apartment residents and hotel guests, with seperate entry’s, separate beach-facing swimming pools, and separate lift lobby’s. The only thing they’ll share is the wellness centre on level nine, which will feature an impressive gym and day spa, as well as the restaurant and bar, which will be available to the residents, hotel guests, and the general public. This  will all be operated by KTQ once construction is complete.
The residences and hotel crossover will also see residents benefit from the hotel’s concierge team. They can order room service from the restaurant, have taxis booked, and call on housekeepers come to their residences, among other complimentary services.
Holmes says the apartments will attract two different camps; owner-occupiers who may want to downsize or relocate to the beachfront, or fly-in, fly-out business people who might have the apartments as a coastal holiday home.
“Imagine you’re in one of the eastern seaboard capitals. You can have a housekeeper freshen the sheets before your arrival, have a bottle of your favourite wine airing, and even pre-order room service from the restaurant below.”
Proof of the extensive consideration to every element of the apartment design is evident immediately. Out of the private lift lobby is storage, big enough to fit a surfboard or beach supplies.
Entry to the apartments is located in the middle of the apartment plan, but the clever design of the apartment means residents are welcomed with immediate ocean views, with the eye-line on arrival looking through the main living areas out to the ocean. An ocean-facing balcony opens from the lounge. Before getting to the living space there’s a sand room for a post-beach dust down.
The multi-purpose room has been designed to offer a potential second living space, or guest room, which opens up to a second outdoor area, again featuring a clever design which can protect it from the elements. Dubbed a Belvedere, the 20 sqm space, which will home an outdoor barbecue kitchen, can be closed off to the wind and the rain, but still make residents feel like they’re outside.
Two of the bedrooms are located at the rear of the apartment, both with five metre frontages of floor-to-ceiling windows to take in the views over the Nerang River and to the hinterland. The enormous master is at the front of the apartment, with its own walk-in wardrobe and ensuite. – spruce it up
“As a client, KTQ continuously challenges and reinvents preconceived notions around what a building and development should be. Peggy approached this project as if she was designing something completely personal,” Little Boat Projects Founder and CEO, Michelle Donnelly, said.
“It was very important for her to envisage going on holidays or living at Serēn, occupying the space as if it was her own home.”