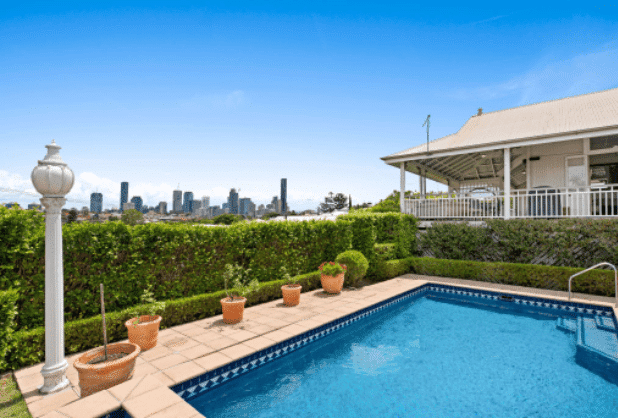 They’ve long housed the lion’s share of lavish Queensland homes but now, after 24 months of exponential growth, medians across a handful of Queensland’s priciest suburbs are outpacing even San Francisco.
Sunshine Beach stole headlines late last year when house price medians soared to $50 shy of $3 million, but just as all eyes turned north to the Sunshine Coast suburb, a smattering of other “millionaire rows” across Brisbane and the Gold Coast also strengthened their hegemony in the luxury market.
They clocked up an eyewatering annual growth of up to 58 per cent, with Mermaid Beach on the Gold Coast, alongside Brisbane’s New Farm and Teneriffe, collecting record median highs of more than $2 million according to Domain’s latest House Price Report.
Global events in the last two years have fuelled Queensland’s house price growth as prestige buyers seek a change in lifestyle. Photo: Supplied
The Gold Coast’s Paradise Point and Surfers Paradise, with Brisbane blue-chip suburb Ascot, were hot on their heels following a growth spurt that pushed medians north of $1.8 million.
Incredibly, they’re figures that are comparable – or even higher – than the San Francisco County median of $A2.174 million, according to the California Association of Realtors.
And with the “Zoom change” trend drawing more remote workers to sunny Queensland, more suburbs could soon enter the exclusive list.
According to the report, Mermaid Beach is now the second most expensive suburb in Queensland – after Sunshine Beach – following a 42.6 per cent hike in the median house price to $2.375 million in December 2021.
Affluent suburbs within Brisbane and the Gold Coast have seen house prices grow up to 58 per cent in the last year. Photo: Supplied
And while the prestigious pocket is sans a Golden Gate Bridge, it does house the famous Hedges Avenue – colloquially known as “millionaire’s row”.
Boasting absolute beachfront properties where not even a path separates the palatial palaces from the dunes, the exclusive strip maintains the Gold Coast’s highest house sale at $27 million, achieved for 33-39 Hedges Avenue in 2008.
“I think there’s been a reset of people’s minds globally about what they want [as a result of the pandemic],” says Alex Caraco of Raine and Horne Elite.
“A lot of people are not satisfied with their life and then when there’s a war people do assess things very quickly. So, there’s definitely a lot more interest in the Gold Coast market [right now].
“People genuinely believe they want the best and the best is Hedges Avenue … and they are no longer coming here to buy and sell a holiday house, but to live.”
It’s a sentiment that allowed Nine Gold Coast news co-presenter Eva Milic, and her property developer husband Marcus Dore, to offload their Hedges Avenue beach house in an off-market deal worth $14.5 million in January this year, and it’s one Caraco says is already fuelling strong interest for a four-level mega-mansion he’s marketing for $20 million at nearby 17 Hedges Avenue.
17 Hedges Avenue Mermaid Beach QLD 4218
“Just the size of the home is remarkable. It’s 817 square metres … it has a lift inside and it’s made of concrete and master-built,” Caraco says.
“Generally speaking, the shortage of inventory on the street makes this home quite special. And it last sold 15 years ago.
“I’ve had 56 inquiries on the property so far … four of those are currently selling in Sydney and Melbourne.
“I also have Dubai and UK buyers looking here.”
Up in Brisbane’s Teneriffe, where the land alone is worth its weight in gold, Ivo Kornel and Olivia Plimmer-Wilson, of Sixty Four Property, are marketing a luxurious 1900s estate at 58-62 Kingsholme Street for circa $10 million.
“It’s a truly special home … it has that sense of history but you also feel like you’re in the Hamptons on a Brisbane budget,” Plimmer-Wilson says.
58-62 Kingsholme Street, Teneriffe QLD 4005
While the home was launched to the market just weeks ago and can be viewed via private inspections only, she said the size of the block – 1151 square metres – made this estate a rare gem in a suburb where large parcels were increasingly being carved up.
“Homes like these don’t come up very often … and I think the good thing about New Farm and Teneriffe is they are suburbs that, even in a bad market, retain their value,” she says.
“Over the past two years they have seen a huge spike and since then it has not slowed down but they have found their footing.”
That footing is a house price record median high of $2.15 million – a figure that climbed 30.7 per cent last year.
Back down on the Gold Coast, in another of the city’s “millionaire rows”, Sam Guo and Julia Kuo, of Kollosche, are marketing a waterfront mansion at 60 Admiralty Drive, Paradise Waters, for $13 million-plus and said the incredible views added to the star-power of the street.
60 Admiralty Drive Paradise Waters QLD 4217
“I think the Gold Coast has just taken off. It has been undervalued for many years and buyers believe that here it’s nice, it’s cheaper [compared to Sydney and Melbourne] and they get a much better lifestyle,” Guo says.
With more and more Gold Coast suburbs set to join the $2 million median club and outstrip the San Francisco median, that “cheap as chips” belief could, however, become a thing of the past.
“We are seeing increased international interest … and now that the borders have opened [we’ll see even more],” Guo says.
Over the past 12 months, median house prices in Paradise Waters climbed an astonishing 58.3 per cent to $1.9 million.