Plans, including 792 apartments as well as a retail and dining plaza on the largely undeveloped 1.15-hectare block, for the 38, 40 and 42 storey towers were lodged with the Gold Coast City Council by a private company linked to SPG Land Holdings in Hong Kong and the Gold Coast developer.

The plans also include a suspended glass-bottomed lap pool on the 26th level.

The plans by Rothelowman and landscape firm Form show each tower would be targeted to a separate demographic and built in separate stages.

Tower one, the smallest, is aimed at young people and families, with a main pool, lounge pool and bar, dining areas, gym and daycare centre.

Tower two would cater for families, with a kids’ zone, sky lounge and gym, while the third, and tallest, tower is aimed at “mature lifestyle buyers” with library, meeting rooms and the suspended lap pool.

The 103 Ferny Avenue block, with frontage on Surfers Paradise Boulevard, and Pandanas and Ocean avenues, was last sold by Hyundai in 2014 for $21 million. 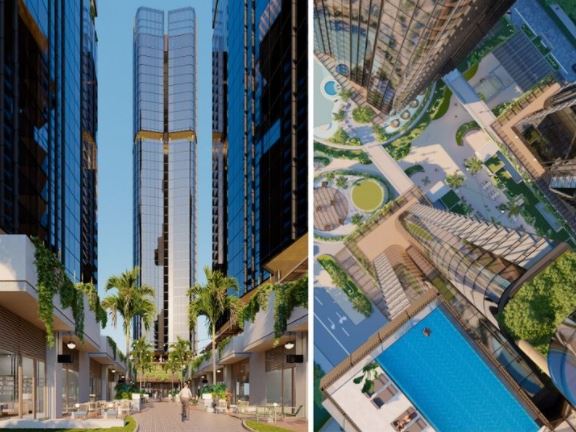 ▲ The Surfers Paradise development has three towers, a commercial plaza and bridges between the buildings. Image: Rothelowman

It was listed for sale again in early 2019 and May 2020 and is currently owned by Ali Holdings 3 Pty Ltd with a small 241sq m space owned by the council. The site is zoned high-density residential.

SPG Land chairman David Wang said the proposed development would be a flagship project for the company.

“This is a transformational development, not only for Surfers Paradise but for the Gold Coast more broadly,” Wang said.

“We have had a long association with the Gold Coast and it’s especially exciting that we have been able to enlist the talents of a remarkable local team to bring this project to fruition.”

Gordon Corp developer Tim Gordon said the partnership marked a strengthening of the relationship between the companies and plans for future joint-venture projects.

“We believe this is a project for its time, created by looking to the past to find what made Surfers Paradise such an iconic address for generations,” Gordon said.

Previous plans for the site include a 50-storey mixed-use development with four towers in 2003, as well as an application including the QT Hotel site in 2007 of up to 65 storeys.

There was also a development approved in 2009 for two towers of 42 and 58-storeys, with 715 apartments and 1955sqm of commercial floor space along the Surfers Paradise Boulevard side of the site, which is valid until June 2022.

Landmark $800 million Surfers Paradise apartment towers to be one of the Gold...
Scroll to top