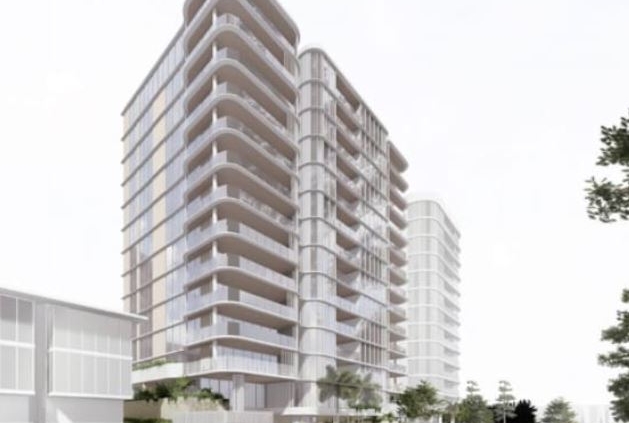 The Brisbane-based Ellivo Architects have drawn up the plans for the 14-level tower, which will home 39 apartments.

Fresh off selling out their Kirra Beach apartment development SOL before it even hit the open market, the local Gold Coast developer Marquee Development Partners are on to their next project.

And it’s literally just down the road at 4 Musgrave Street, on the in-demand Kirra Beach in Coolangatta.

The Brisbane-based Ellivo Architects have drawn up the plans for the 14-level tower, which will home 39 apartments.

In their brief submitted to the Gold Coast City Council, Ellivo note the importance that all primary indoor and outdoor living areas are oriented to the beach.

The typical floorplan, from levels four to 13, will be three three-bedroom apartments, ranging between 163 and 187 sqm. 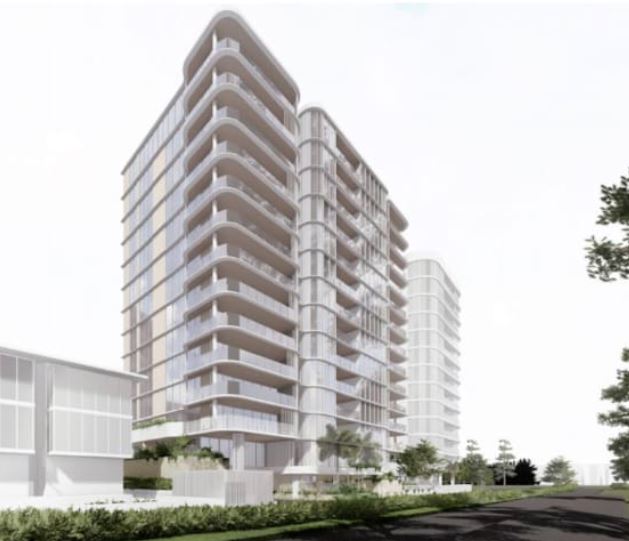 Level three will comprise three three-bedroom apartments, configured a little differently than the standard, with the outer apartments in the line of three wrapped in balconies and offering two living spaces.

Level 14 accommodates the penthouse product, at 240 sqm and 250 sqm, each with four bedrooms. Each apartment will have similar floorplans to the three-bedroom apartments, but an extra bedroom, living area and study nook. The balconies that open from the open plan living, kitchen and dining areas are well separated from each other, located on each corner of the building.

The building’s only one-bedroom, and a further two three-bedrooms apartments, are on level two, which is also where a gym and a yoga/pilates studios sit within a communal open space.

Further amenity is located on the ground floor, where there’s a swimming pool, pool deck, sauna and ice bath room, as well the the lobby.

Ellivo say that the form and appearance of the development evokes memories of the relaxed coastal lifestyle by including reference to the ‘coral skeleton’ of the Kirra Reef, ‘horizontal waves’ of the tidal movement and the natural colours of Kirra which embody warm sandy textures and an earthy terracotta palette.

“Through this design inspiration, a luxurious contemporary residential environment is created, that is enhanced by private outdoor living spaces of generous proportions which benefit from optimum views of the beachfront.”

Marquee are seeking to push past the limits of the City Plan for the site, which has a building height overlay of 29 metres. However, given the site is located in an ‘Urban neighbourhood’, a further uplift of 50 per cent can be contemplated where the development can demonstrate compliance with the higher order Strategic framework provisions. The proposed development comprises a total height of just over 43 metres.

Marquee have a solid track record on the Gold Coast, and have recently secured huge success at their first Kirra Beach apartment project Sol, which didn’t even hit the open market.

The team are also behind Shoreline, the 17-level tower on Old Burleigh Road between Main Beach and Broadbeach.

SOL, at 133-135 Musgrave Street, sold out earlier this year, with the team fielding some 1,600 prospective buyers even before launch. The 11-level tower will have 46 two, three and four-bedroom apartments.

The proposed development achieves a good balance between built form and green areas. The proposed development will include hard and soft landscaping elements along all property boundaries, to a standard consistent with this type of development. A range of tiered vertical and horizontal landscaping will be used including climbing and cascading plant species which will be planted adjacent to the vertical screening and in planter boxes to screen and soften the building from the street and shared boundaries. It is considered the landscaping will soften and enhance the building and positively contribute to the existing neighbourhood character and amenity.

Contributes to neighbourhood character and amenity

The overall design and appearance of the development is of high-quality architectural merit, producing a positive contribution to the streetscape character and amenity. The architectural form, presenting generous private open space balconies toward the street frontage of the site, creates the perception of openness and a light-weight element of built form to the streetscape. This is further enhanced by the integration of landscape planting within the ground level entrances to the site

The site is irregular in shape and has a long frontage to Musgrave Street of 43 metres with narrow sides, resulting in an elongated building form to Musgrave Street. The design has accommodated this site constraint by incorporating necessary breaks in the built form at both the front and the rear.