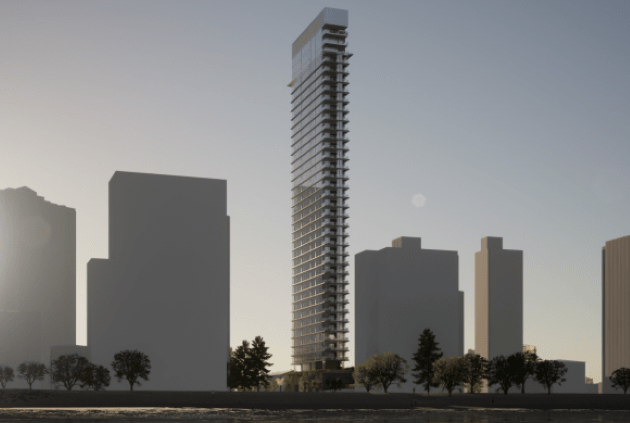 The Melbourne-based Little Projects is set for its third Gold Coast apartment development.

Having secured all of the sales in their one per floor tower Aperture in Broadbeach following the sell out of Signature, Little Projects, led by Leighton Pyke, are sticking to Broadbeach.

They’ve filed plans, in a joint venture with the fellow Melbourne-based developer R.Corp, for another high-end tower at 118 Old Burleigh Road, with 33 apartments across the 37 levels on the corner of Old Burleigh Road and Australia Avenue. It will tower over the neighbouring Ocean Royale and Boulevard Tower, which are 16 and 17 levels respectively. They are also more focused on short-term accomodation apartments, whereas the new project, dubbed One Australia, will be another by Little Projects targeting the high-end owner-occupier.

DKO Architecture has put forward the designs for the slender tower, which will have full floor apartments, with 218 sqm of living space, from level two to level 33. Above will be a three-level penthouse with its own rooftop pool.

In their design statement, DKO noted they were inspired by two main concepts.

“The first one is the idea of le estate or the Italian summer – the ideas of relaxation, inspiration and escape,” DKO wrote in their submission to the Gold Coast City Council.

They said Italians pretty much own the concept of a long summer.

“It is a tradition that is absorbed by its people.

“August is the “off’ month par excellence, especially in the days surrounding Ferragosto, a public holiday that takes place on 15 August.

“For two to three weeks, the country shuts shop: companies stop operating while employees escape to the beach.

DKO said the second concept draws on a strong modernist language and tradition, which is historically related to a strong European, and Italian, architectural tradition, and also closely linked to a sense of classical and timeless proportions and architectural detailing and language.

“The building is conceptualised as a tripartite structure, a piece of paradise suspended between the context of sand and sea, and the sky which floats above in the shape of a tower,” DKO added.

The extensive amenity is located on the first level above the podium.

“It is envisioned as a place of escape from daily life, a suspended place of peace and quiet,” DKO say.

The communal zone is book-ended by a pool towards the ocean end and an indoor/outdoor exercise zone towards Old Burleigh Road. In between, there are a series of smaller spaces including a co-work zone, residents lounge and a tucked away outdoor room which is elevated and provides views over the entire communal zone as well as views along Old Burleigh Road.

Broadbeach is one of the most popular suburbs for both developers and buyers in 2022. A number of Queensland’s most high profile developers have lodged plans for both high and low density towers,

Mosaic has just filed plans for their first tower, and recently secured a second site around the corner for another project expected to launch this year. Anthony Quinn, in a joint venture with Glenvill, filed for an owner-occupier focused tower a few doors down on Old Burleigh Road, and while Morris Property Group have a few high and low density projects on the horizon in the suburb.

Little Projects secured the 690 sqm site through GV Property Group’s Antonio Mercuri and Luke Reaby, who got the owners of the two-storey walk-up, around 40 years old, to band together the sell the prime site.

GV had over eight offers for the site from both local and interstate developers.

“It’s a complex site that was best suited to veteran developers and ones with local knowledge and experience,” Reaby says.

“The architecture and design has capitalised on the expansive 43m frontage down Australia Avenue – taking advantage of the views of the water.”

“The shape of the site lends itself to a very unique design where each full floor apartment provides nearly 360 degrees of facade.”

Reaby notes there are no beachfront projects in Broadbeach that aren’t sold out and One Australia fills a much needed demand.