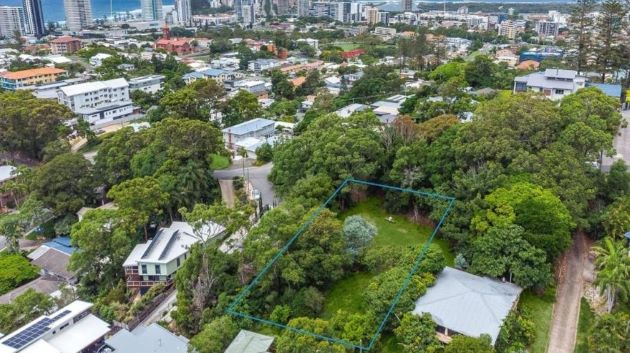 Former Home and Away starlet Holly Brisley has quietly moved her family to the Gold Coast where she will build her forever home after selling a Sydney harbourside pad for more than $12m.

The actor, her property developer husband, Paul Ford, and their two kids, have been spotted on their boat enjoying the Queensland waterways as property records reveal they have secretly snapped up a rare block of land in Coolangatta for $1.7m.

The 939 sqm, elevated block has coastal and ocean views, and is only 850m from the beaches, restaurants and shops of Coolangatta and Kirra.

It is understood Brisley plans to build a $3m house on the site.

Actress Holly Brisley has bought this block of vacant land in Coolangatta for $1.7m.

Col Wright of RBR Property Consultants, who marketed the property, said it had previously been used as a tennis court for the adjoining property, but had since been subdivided.

Mr Wright said it sold for “well over reserve” and was in demand because vacant land in Coolangatta — especially with views — was incredibly rare.

“Our market is still very strong at the moment because we’ve really still got a massive supply and demand problem,” Mr Wright said.

“There are only 110/120 house blocks left to develop. The rest are pretty much unit blocks.”

That still leaves plenty of money in the bank given their property in Balgowlah Heights fetched $12.15m — setting a new sale price record in the suburb.

The four-bedroom, three-bathroom home was set on 700 sqm of terraced lawns, and came with direct access to Forty Baskets Beach.

Brisley, who grew up on the Gold Coast, recently announced on social media that she would miss her Sydney home of nine years, but “new beginnings and great change upon us”.

She also posted photos just last month expressing how much she was enjoying the Sunshine State: ‘Winter in Queensland is awful. Love, love, love our new boat’.

They are currently renting in the area.

Records show Brisley also owns a four-bedroom house on more than 1300 sqm in the Ipswich suburb of Churchill, which she bought in November last year for $440,000.

The television presenter of World’s Craziest Videos, who has also been a contestant on Dancing with the Stars, got her start in showbiz when she was a teenager hosting Agro’s Cartoon Connection.

More recently, she has starred in the television series Fat Pizza: Back in Business and has moved into a career as an independent filmmaker.