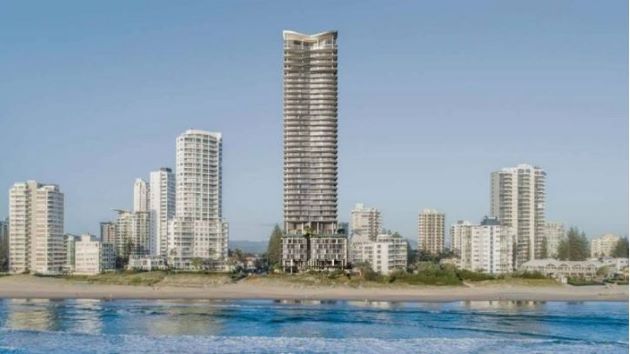 A new era of high-rise development is dawning along a beachfront strip on Queensland’s Gold Coast with a string of tower projects planned, including an adults-only hotel.

Oceanfront urban renewal is under way with ageing and rundown buildings from the 1970s and 1980s making way for taller and more luxurious towers.

The surge of proposals follows a $150-million sand grab along the Northcliffe Terrace-Garfield Terrace stretch between Surfers Paradise and Broadbeach.

One of the most recent proposals lodged with the Gold Coast City Council is for a 41-storey residential and adults-only hotel beachfront tower on a 2025sq m site at 27-35 Garfield Terrace.

It has been filed by KTQ Group, headed by billionaire Queensland coal baron Brian Flannery and his wife Peggy who have been quietly staking the sizeable claim atop the dunes in an almost $20-million property play.

▲ Oceanfront urban renewal is under way along the Garfield Terrace beachfront strip.
The prime holding just down the road from the Northcliffe surf club includes the Kuleena apartment complex and two other buildings to the north.

According to the DA they will be replaced by a 157.5m tower comprising 60 residential apartments above 60 short-term accommodation rooms, which have been described by the developer as an “adults-only hotel” offering.

“The hotel is not the dominant use proposed within the development, as most of the development is set aside as multiple dwelling units … to ensure the intent of the zone is maintained,” the documents said.

The Flannery’s latest project follows the success at the southern end of the Gold Coast redeveloping the Kirra Beach Hotel site as well as the creation of the Elements resort on the former Club Med site on the outskirts of Byron Bay.

To be called Seren, the Garfield Terrace tower has been jointly designed by Little Boat Projects and Bates Smart.

In addition, it will provide a restaurant and bar on level one and day spa-gym on level eight, an entire floor dedicated to wellness for residents, guests and visitors.

▲ The Flannery’s KTQ Group is planning a 41-storey tower with 60 residential apartments above a 60-room “adults-only” hotel.
“The proposal design is driven by a highly contemporary, material rich design and green architecture, offering a sophisticated coastal style,” the filed documents said.

“The incorporation of these coastal elements and embedded greenery at the ground and podium level is in keeping with the established character of Surfers Paradise.”

Among the rising tide of developments along the booming beachfront strip prolific Sydney developer Iris Capital has lodged plans for a 38-storey apartment tower on a narrow 900sq m site at 73 Garfield Terrace.

Both the proposals lodged with the Gold Coast council for Surfers Paradise and Broadbeach are for sites spanning only 607sq m with 15m-wide frontages.

Another Sydney developer, Xsite Group, has filed plans for a 26-storey oceanfront tower with 37 apartments for the 1970s Anglesea Court site at 9-11 Garfield Terrace.

And Cronulla-based Sammut Developments in partnership with Alceon has plans to deliver a $200-million, 35-storey tower with 49 apartments on the site of the ageing 10-storey Garfield on the Beach at 43 Garfield Terrace.