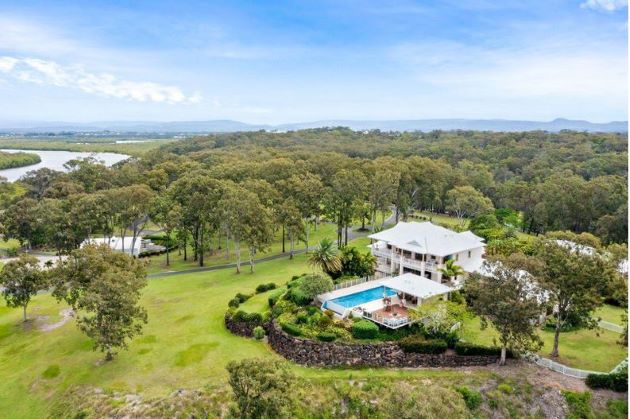 The luxury Gold Coast home where Johnny Depp and Amber Heard’s two dogs, Pistol and Boo, stayed under house arrest after they were illegally smuggled into the country is making headlines again during his $US 50 million defamation trial against Heard.
It’s been revealed that the 10-bedroom 10-bathroom Coomera estate – which is currently on the market – was also the site of a 2015 fight between Depp and Heard where she allegedly threw a vodka bottle at him, severing the tip of his finger.
“She threw the large bottle and it made contact [with my hand] and shattered everywhere,” Depp testified. “Then I looked down and realised that my tip of my finger had been severed.”
Heard has denied the claim.
David Kipper, a concierge doctor, testified that he was called to the residence and cleaned Depp’s wound before taking him to the emergency room. He also said that he asked staff to search the house for the missing fingertip.
House manager Ben King testified in court this week, explaining that he was the one who found the fingertip in the home, “directly below the bar,” where he noticed a paper towel with “lots of blood around it” on the floor.
“[They] were keen to get it to the hospital quickly to see if it could be reattached,” King testified.
He then detailed that the pair had left the house in a shambles with up to $50,000 in damage following their explosive fight.
During Depp’s testimony last week, he claims he was forced to hide from Heard in the sprawling home to escape her alleged tirades.
“The house they’d rented for me in Australia was quite a large place. I think I ended up locking myself in at least nine bedrooms, bathrooms that day as she was banging on the doors and streaming obscenities and wanting to have a physical altercation,” Depp said.
Depp and Heard rented the Queensland mansion from MotoGP world champion Mick Doohan in 2015, during Depp’s time filming Pirates of the Caribbean: Dead Men Tell No Tales.
The listing states that “Brad Pitt and Angelina Jolie have also been guests of the mega Mansion,” in 2013 while Jolie filmed Unbroken. Singer Pink and her motocross-racer husband Carey Hart have also reportedly stayed at the compound.
The private riverfront property known as ‘Diamond Head’ is dubbed ‘one of Australia’s most luxurious estates’.
Set on 18 hectares with never-to-be-built-out river, skyline and hinterland vistas, the property is anchored on 628 metres of prime Coomera and Pimpama River frontage and is one of the largest private allotments found on the Gold Coast.
Elite features include a tennis court, landing strip, marina and 400-square-metre concrete area used for cars, jet skis, boats and to land your helicopter. The space sits directly outside a large shed with four offices on its mezzanine level.
Being the home of a five time consecutive 500cc motorcycle World Champion, there’s also a custom go-kart track and dirt bikes.
Other features on the manicured park-like grounds include a 500-square-metre man cave with fully equipped bar, as well as a large al fresco area with 20-metre wet edge pool and entertaining pavilion with teppanyaki grill and bathroom.
Guests are well catered to with both a two-bed caretaker’s cottage and separate three-bed, two-bath guest house.
The main residence with timber and marble finishes houses five ensuite bedrooms, multiple entertaining areas, a gym, lift, wine cellar, home theatre and six-car garage.
There are al fresco areas and a sprawling deck with dining pavilion “set against the backdrop that shimmers with Surfers Paradise skyline, Broadwater and South Stradbroke views”.
The listing explains that Doohan’s overseas interests and business mean he is spending more time out of Australia and is his reason for selling Diamond Head.
The sprawling property also has a caretaker’s cottage and separate three-bed two-bath studio. (Domain)