The South East Queensland developer Spyre Group has lodged plans for their most boutique project yet on the Gold Coast.

Having spent around $11 million on 10 Goodwin Terrace, Burleigh Heads, earlier this year, the Andrew Malouf-led developer has filed for an exclusive collection of just three apartments on the near beachfront site.

Designed by bureau^proberts with landscaping from Cusp, 10 Goodwin is crowned by a two level penthouse with its own private rooftop pool.

“10 Goodwin Terrace brings something new to the long-established coastal neighbourhood of Burleigh Heads,” the design statement from bureau^proberts suggests.

“It resolves a form and envelope that achieves transparency where maximum exposure is required and shelter where refuge is called for. Demonstrating a deep understanding of the qualities of this site, the architecture creates an expression that honours a coastal landscape and reinforces a sense of belonging to its place.”

There was a pre-lodgement meeting with the Gold Coast City Council where a six level development was discussed, however despite the height of adjoining towers, the council considered the building height to represent a departure from the medium density residential zone code and the strategic framework. 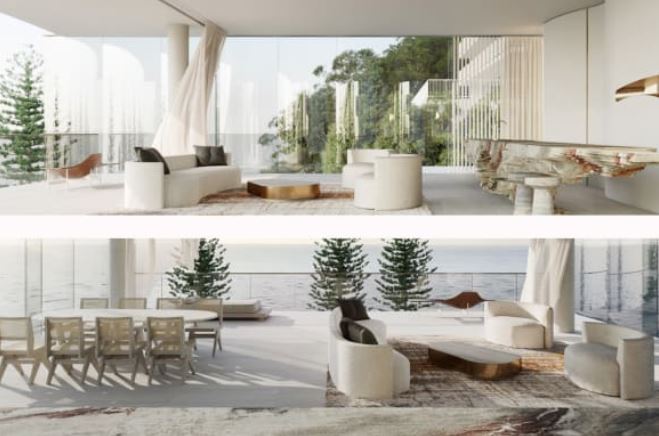 Spyre went away and came back with just the three apartments, each with a density of one bedroom per 60 sqm.

Goodwin Terrace has been popular for boutique apartment developments. The local developer FORME, led by managing director David Calvisi, recently sold out Luna, at 50 Goodwin Terrace. Those apartments had a starting price of $4.1 million.

Spyre have had success locally too, with their sold-out Natura development located around the corner on The Esplanade. More recently Spyre sold out their Coolangatta apartment development Cala Dei in just four weeks.

The collection of 31 two and three-bedroom residences sold for an average of $1.9 million, with 11 sales recording a purchase price over $2.5 million.

10 Goodwin Terrace, Burleigh Heads is an expression of the natural landscape – suspended between an ancient, rugged headland and endless, glassy ocean. Drawing parallels to the topography of Burleigh Headland, the building form steps in unison with the topography. The architectural envelope echoes the ephemeral quality of the ocean with a rippling surface of fluted glass enclosing eastern and western sides. Three whole-floor apartments frame the panorama of rolling sands and Coral Sea that stretches north from this place of unrivalled aspect and outlook.

While the architecture explores an expression that abstracts and champions an exhilarating coastal location, the development is committed to making an enduring contribution to the street and neighbourhood of Burleigh Heads. This will be achieved through carefully considered street and boundary interfaces and a commitment to an architectural and landscape expression that honours this place of natural beauty. For residents of the development, the architecture will create a sanctuary that amplifies the divine qualities of this location – drawing inside, the sound of waves, salt-laden breezes and tempered, sub-tropical sunlight.

The interior realm explores an experience that presents in trilogy. It is distinguished by open, invited, and private realms which draw distinctive parallels to the open expanse of the ocean, the intermediary shoreline, and the sanctuary found in the refuge of the landscape. This linear sequence, connecting living spaces overlooking the shoreline to private retreats nestled into the foothills of Burleigh Heads, captures the full spectrum of the building’s distinctive, spatial experience. 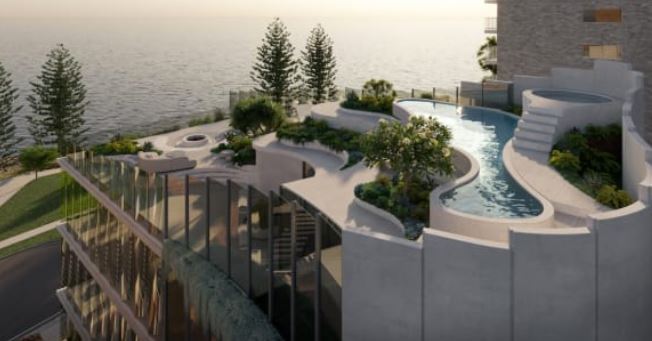 On the rooftop, the ambition to create a habitable, formed landscape is legible in the expression of cascading pools and terraces. Natural landscape is interwoven to create shade and ground the experience in this place of elevation. Smaller gardens take seed in the crevices of the façade where the fluted shell of the east and west façade merge to become solid panels encasing the southern edge.

Landscape is further sown into sculptural gardens framing the edges to balconies. Mature, native landscape is introduced at street level to create inviting spaces for the public realm.

10 Goodwin Terrace brings something new to the long-established coastal neighbourhood of Burleigh Heads. It resolves a form and envelope that achieves transparency where maximum exposure is required and shelter where refuge is called for. Demonstrating a deep understanding of the qualities of this site, the architecture creates an expression that honours a coastal landscape and reinforces a sense of belonging to its place

Development update: What happened on the Gold Coast in June?
Scroll to top