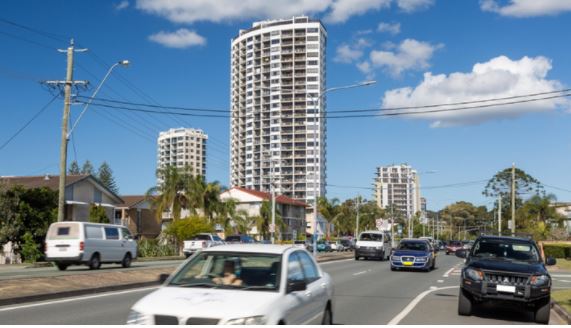 Sherpa Property Group chief executive Christie Leet recently spoke with The Urban Developer about the appeal of the Gold Coast.

The developer is ramping up its pipeline on the Gold Coast following the acquisition of two sites, at Biggera Waters and Burleigh Heads, recently with more than $250 million in projects on the coast.

Three houses at 949-953 Gold Coast Highway would make way for a 34-apartment development designed by HAL Architects for an aggregated 1581sq m lot.

The building height and number of bedrooms are in excess of planning overlays, but the planning documents indicate there are other developments of this scale in the area.

“The tower includes large recesses and projections and high-quality materials to break up the extent of building mass,” the report states.

“The upper levels are tapered to soften the building’s appearance and minimise the shadow cast on the surrounding area.”

▲ The development as seen from the Gold Coast Highway, which developers say is consistent with other building heights in the area. Image: Sherpa

“The communal area will be located on the eastern side of the building and contain a pool, gymnasium, yoga room, sauna, steam room, breakout spaces and amenities,” according to the application.

“[There is] a strong focus on wellbeing and revitalisation, and complements the site’s context in terms of access to Currumbin Creek, Palm Beach, parklands, and footpaths and boardwalk.”

There are 77 car parks across the ground level and a basement level.

Leet said strong employment and migration growth made the Gold Coast an appealing market to invest in, as well as the development opportunities on offer.

Record apartment sales on the Gold Coast have dragged supply to historic lows, particularly on the southern beaches where supply was down to 2.1 months, compared to the northern strip which had more than 13 months’ supply.

About $800 million of apartment stock was sold in the March quarter—just $112-million short of the total sales in 2020.