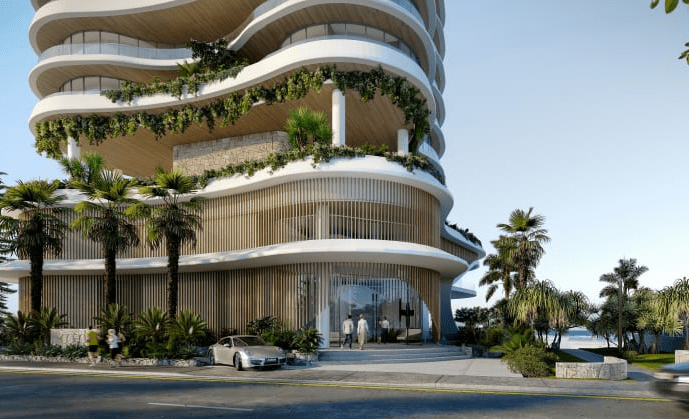 COAST will rise on a prime beachfront site at 43 Garfield Terrace with construction scheduled to start this month following the appointment of Multiplex.
Sydney-based luxury developer Sammut Group has signed Australia’s largest builder Multiplex to construct its debut Gold Coast development, the $200 million absolute beachfront, COAST, at Garfield Terrace.
The appointment comes on the heels of the premium apartment project achieving a sales record for the Gold Coast with an average price of $5.25 million per apartment recorded as buyers flocked to the development following its release late last year.
COAST will rise on a prime beachfront site at 43 Garfield Terrace with construction scheduled to start this month following the appointment of Multiplex.
Buoyed by strong sales, Sammut Group, which is undertaking the development in partnership with financier Alceon Group, is now looking ahead to the delivery phase of the luxury beachfront tower.
“The appointment of Multiplex as our building partner for COAST is a significant milestone for this landmark development,” said Sammut Group CEO Allen Sammut.
“After achieving exceptional sales success, we are now progressing to construction of our vision to create the Gold Coast’s premier residential address, firmly supported by one Australia’s most experienced builders.”
Multiplex has been responsible for the delivery of several of Southeast Queensland’s most high-profile developments, including Destination Gold Coast Tower 2 at Star Residences, Queens Wharf Brisbane, Jewel Gold Coast, and the W Hotel Brisbane.
Coast 43 Garfield Terrace, Surfers Paradise QLD 4217
The appointment to deliver Sammut Group’s $200 million COAST will add to the builder’s already strong pipeline of projects in Queensland.
“We are delighted to be working with such a well credentialled developer as Sammut Group on such an iconic development for the Gold Coast,” said Multiplex Regional Director, David Redding.
“COAST will be a defining benchmark for the Gold Coast, and we look forward to leveraging our extensive track record of delivering high quality projects across Australia to bring this striking residential collection to life.”
Sammut Group COO Julian Sammut said the company was looking forward to taking the next step in bringing the project to life for buyers.
“This is an exciting project for us, being our first in Queensland, and we are looking forward to breaking ground on Gold Coast soil in the coming weeks,” he said.
COAST will deliver a suite of beachfront residences over 35 levels to the Surfers Paradise beachfront, contained in a striking tower designed by PBD Architects.
The appointment of Multiplex is a major employment boom for the Gold Coast with the project expected to employ approximately 400 workers during its construction period.
“We take very seriously the jobs creation that is afforded to us through securing such quality projects,” said Mr Redding.
Just eight apartments remain to be sold at COAST, the first for Sammut Group on the Gold Coast after three decades of delivering premium-project excellence in iconic locations across Sydney.
The multi-award-winning developer has incorporated a wealth of resident amenities in the COAST design, including a 32-metre pool that wraps around the exterior of the building along the entire eastern and northern frontages.
This will be accompanied by a cabana and lounges, a barbecue entertaining area, wellness facilities including a yoga studio, massage rooms and sauna, function facilities, a residential beach bar with breakout areas and a commercial-sized gym.
COAST has ignited the imagination of buyers, setting a new price record for sub-penthouses twice on the Gold Coast, one for $8.775 million and then another for $8.95 million – both of which sold to interstate buyers.