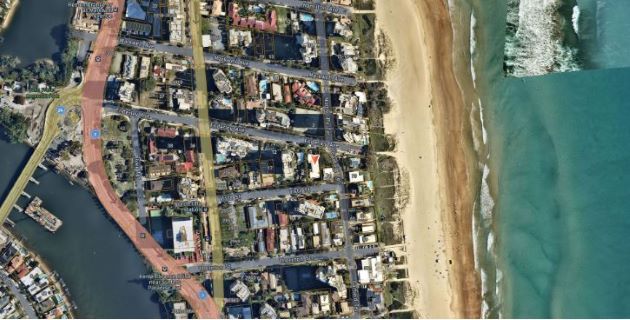 Brisbane-based developer Siera Group remains confident in the Gold Coast apartment market, lodging plans for an oceanfront apartment tower in Surfers Paradise.
The 25-storey project, the developer’s second significant play on the Gold Coast in recent months, is planned for a 950sq m site at 8 Enderley Avenue at the southern edge of Surfers Paradise.
Lodged with the Gold Coast City Council, the proposed BDA Architecture-designed tower would replace a modern three-storey apartment block which was amalgamated by the developer over a six-month period last year.
Siera Group managing director Brent Thompson told The Urban Developer it had pursued the site due to its rare dual street access, its position alongside a neighbouring park and its close proximity to the beach.
“It is not only the beach that is extremely accessible, residents will have a short 100m walk to the light rail station or the Northcliffe Surf Club to the south or 10 minutes into the heart of Surfers Paradise to the north,” Thompson said.
“We have also put an immense amount of work into the design of the project to ensure its buildability in a period where the delivery of projects is becoming more challenging and we believe less and less projects will come to fruition.”
The tower, which has been designed by BDO to splay inwards from level 12 to its peak, will sit between an existing multi-residential tower to the west, and a low-rise residential apartment block and public park to the East.
▲ The site is bounded to the east by a 3-storey residential building and Baronnet apartments, a 17-storey apartment building, to the west. Image: Nearmap

It will be built above a two-storey podium and three levels of basement parking for 54 cars.

The tower’s ground floor area will comprise a mix of visitor and residents car parking with two street frontages—one to Vista Street, for residents heading to the Northcliffe Light Rail Station and the other from Enderley Avenue for those heading to Surfers Paradise 60m from the site.
The building’s podium will feature communal facilities and gym across level one and a private dining area, with bar and cellar, as well as office space and outdoor pool and deck on level two.
The owner-occupier-targeted development will feature 54 apartments with three apartments per floor planned for the lower half of the building and two per floor on its upper levels.
The building’s two bedroom apartments will start from 90sq m with 10sq m of balcony, while three bedroom apartments will feature nearly 200sq m of internal living space and a 20sq m of balcony space.
The building’s penthouse will be a full floor apartment offering residents access to a private rooftop area complete with firepit and private garden.
“We have and continue to invest an immense amount of time researching and understanding the Gold Coast market,” Thompson said.
“What this research tells us and despite the perceived development activity is that there is a genuine under supply of quality, boutique apartments across the Gold Coast and in particular within Surfers Paradise which continues to see the largest population growth across the region.
“The Gold Coast is facing a major housing shortage with the current vacancy rate of 0.4 per cent highlighting this and the current pipeline of projects and anticipated supply not enough to meet the current demand let alone future interstate and overseas migration.”
The venture marks Siera Group’s second development on the Gold Coast after unveiling plans for a $75-million apartment tower on Chevron Island late last year.
That project, on the prized eastern-side of Chevron Island at 39 Darrambal Street, will comprise a 17-storey tower offering 83 two- and three-bedroom apartments as well as a rooftop pool and garden.
“At our Tapestry project we are seeing strong demand from local owner occupiers as well as increased demand from interstate investors and owner occupiers,” Thompson said.
“Interstate buyers see the value proposition the Gold Coast offers and with talk of interest rate risers and the potential impact on property prices we are already seeing buyers who want to lock in a property for the next stage of their life and cash in on the growth they have seen in their current homes.”
Oceanfront urban renewal has hit fever pitch on the Gold Coast over the last 12 months with ageing and rundown buildings making way for taller and more luxurious towers.
The surge of proposals follows a $150-million sand grab along the Northcliffe Terrace-Garfield Terrace stretch between Surfers Paradise and Broadbeach.
Last month, KTQ Group, headed by billionaire Queensland coal baron Brian Flannery and his wife Peggy, lodged plans for a 41-storey apartment and hotel tower at 27-35 Garfield Terrace.
Sydney-based Iris Capital also has plans for a 38-storey apartment tower for a narrow 900sq m site at 71 Garfield Terrace in Surfers Paradise.
Fellow Sydney developer Sammut Group, in partnership with Alceon, is also advanced on a $200-million, 35-storey tower with 49 apartments on the site of the ageing 10-storey Garfield on the Beach at 43 Garfield Terrace.
Meanwhile, Melbourne’s most prolific apartment developer Central Equity also has unveiled plans for a 56-storey apartment tower after amalgamating 19 titles to create a 3259sq m block on the corner of Garfield Terrace and Frederick Street.
Harry Triguboff’s Meriton Group has recently put forward plans for a dual-tower development at 152 The Esplanade comprising 637-apartments.