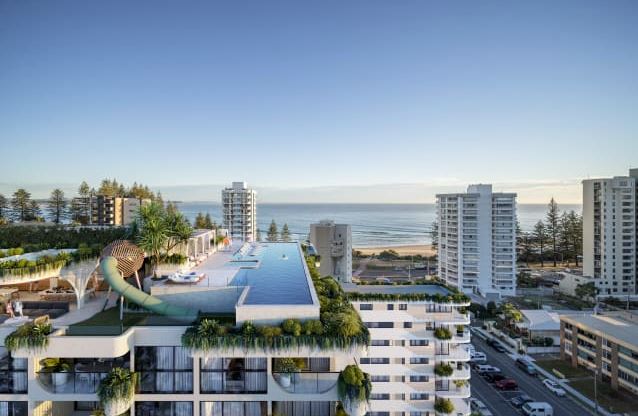 Nearly three quarters of buyers were local owner-occupiers, with around 30 per cent coming from Sydney’s beaches and the intercity and fringe suburbs of Melbourne

It took just a weekend soft launch for the luxury developer S&S Projects to secure over half of the sales in its latest Gold Coast apartment development, Esprit.

Esprit, at 217-227 Boundary Street, in the sought-after Rainbow Bay location in Coolangatta, sold over half of the 97 apartments on offer in the two interconnected Cottee Parker-designed buildings.

No surprise in the quick-fire sales by KM Sales and Marketing agent Jayde Pezet given the location, the fact Esprit is crowned by Club Esprit, the Gold Coast’s first ever residents-only rooftop wellness centre, and the size of the apartments.

Nearly three quarters of buyers were local owner-occupiers, with around 30 per cent coming from Sydney’s beaches and the intercity and fringe suburbs of Melbourne.

“Esprit is a new luxury residential high-water mark for Rainbow Bay on so many levels and that has been validated by the extraordinary number of sales secured over the weekend,” Gedoun said.

“It is more than a breathtaking place to call home and these astute buyers have recognised and been drawn by its superb location, exceptional level of amenity and superiority of design.”

Gedoun describes Esprit as a project “born from Rainbow Bay’s natural incitement of a restorative lifestyle rooted in enjoyment”.

The rooftop wellness club, Club Esprit, will span more than 1,100 sqm and will feature every wellness and recreational amenity, dubbed as offering an elite-athlete standard of physical and mental rejuvenation.

The wellness amenity is balanced by an expansive recreational space, including a children’s lawn with play equipment, a private dining room, private terraces, BBQ areas and an outdoor cinema.

“Not only are residents securing an immaculately designed home but essentially also a lifetime membership to one of the most impressive and exclusive wellness clubs to exist on the coast,” said Jayde Pezet of KM Sales and Marketing.

Esprit is S&S Projects’ third venture in the beachfront residential enclave and surfing mecca, following the success of the sellout of the $74 million Flow Residences up the road, as well as the nearby Awaken Residences.