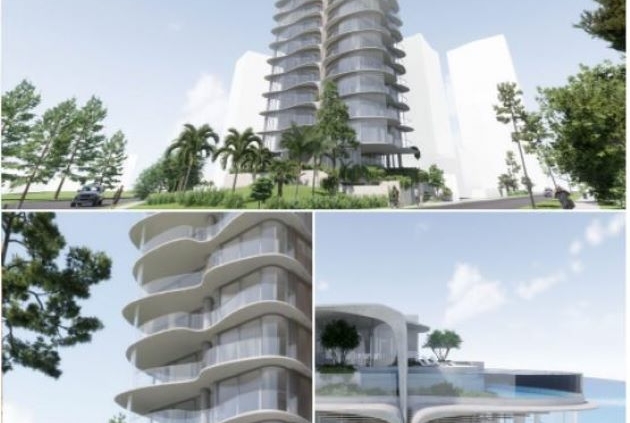 Plans have been lodged for a 24-storey apartment high-rise with petal-shaped floor plates at Broadbeach, as tower proposals tally up at the epicentre of the Gold Coast’s development boom.
QNY Group, headed by local businessman Anthony Quinn, and Melbourne developer Glenvill Developments are behind the $85-million proposal earmarked for a 511sq m site at 21 Broadbeach Boulevard.
The Gold Coast-based company put its foot on the parcel—located at the end of a cul-de-sac fronting the beach—earlier this year in a $10.1-million deal, equating to almost $20,000 per sq m.
“This site is like no other on the Gold Coast and we wanted the design to reflect its uniqueness,” Quinn said in a statement.
“We’ve worked closely with the architects to come up with a design that will coexist with the natural environment while delivering an iconic landmark that enhances the aesthetic of this leafy Broadbeach Boulevard corner.”
The joint venture is the first foray into the Gold Coast apartment market for Glenvill Developments.
“This will be our first multi-residential project on the Gold Coast, but this not about riding the wave,” Glenvill’s chief executive Len Warson said.
“Queensland had plenty of growth potential prior to the pandemic. We study the market and use those insights to make our next moves, and this was a deliberate move.”
The DA documents filed with the Gold Coast City Council indicate the proposed development would comprise 19 three-bedroom whole-floor apartments across levels 2 to 20, a three-bedroom lower penthouse over levels 21 and part of level 22, and a three-bedroom upper penthouse spanning level 23 and part of level 22.
A rooftop communal open space with deck and glass-edge pool is planned for level 24, with a small portion reserved as a private area for the upper penthouse.
Below the residential levels, a lobby entrance and visitor parking is proposed for the ground floor and a gym and sauna on level 1.
Parking in the four-level basement is to be accessed via two car lifts.
The proposed tower has been designed by Contreras Earl Architecture, whose co-founder Rafael Contreras Morales spent seven years working for world-renowned Zaha Hadid Architects.
If approved, the development on a corner lot near the Broadbeach Bowls Club will replace Karoola, a two-storey walk-up block of units.
The submitted architectural design statement said the building’s form was inspired by the surrounding vegetation and parks.
▲ Arist’s impressions of the planned Broadbeach tower designed by Contreras Earl Architecture, which has a growing portfolio of Gold Coast projects including Sunland’s 272 Hedges Avenue.
“The tower uses its vertical structure to articulate the elegant design, which emulates a tree trunk that is seamlessly connected to each floor slab, which at the same time expresses an elegant organic petal shape,” it said.
A filed planning assessment report concedes the proposal is not compliant with the site’s specified residential density performance outcome, which required one bed per 13sq m.
The proposed development has a density of one bed per 8.17sq m but, the report said, the performance outcome of the zone code had been “overtaken by events, as council regularly approves development at densities much greater”.
Broadbeach is now among the Gold Coast’s biggest development hot spots, led by the $2-billion masterplan for The Star Gold Coast casino site.
Iris Capital has been given the green light to build a $800-million project comprising 400 apartments over two towers of 40 and 56 storeys on the site of the Niecon Plaza.
Also, Brisbane-based developer Turrisi Properties has plans for a $100-million, 22-storey residential development at 9-11 Armrick Avenue.
Broadbeach Luxe Development, headed by director John Kubatov, has launched its six-star, $160-million residential project at 2 Charles Avenue, comprising 28 apartments.
More recently, south-east Queensland developer Horan Group has lodged plans for a 28-storey DBI-designed apartment tower.
The 120-apartment tower planned for the 1214sq m site at 11-13 Rosewood Avenue would comprise 96 two- and 24 three-bedroom apartments atop a podium.