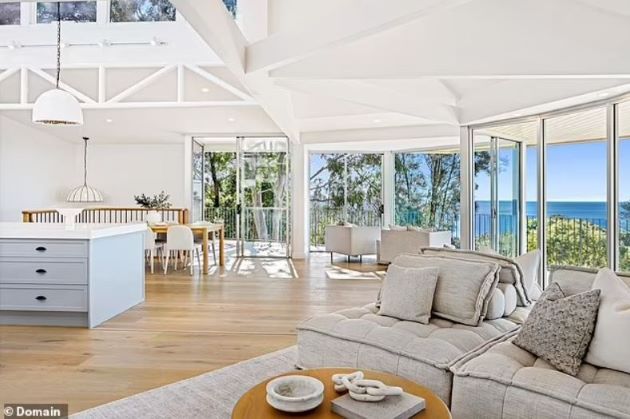 Businesswoman Jan Bradnam came home with much more than she bargained for when she went out to buy a pot plant – instead forking out hundreds of thousands of dollars for a house.

It was back in 2007 when Ms Bradman left her Main Beach house on the Gold Coast in Queensland and, instead of heading to the nursery, she made a beeline to an auction in the beachside suburb Currumbin.

Mesmerised by its breathtaking water views the moment she walked inside the double-storey, three-bedroom home, Ms Bradman quickly kicked off the bidding, determined to snap up the hilltop property.

Fifteen years on, the Bradnam’s Windows & Doors co-founder and director has no regrets about her impulse buy, despite having never lived in the investment property.

‘It was the most outrageous thing I think I had ever done, and my husband just looked at me like a stunned mullet when I told him,’ Ms Bradnam told the Gold Coast Bulletin.

‘Of course buying under auction conditions, I had no building inspection, nothing. The place could have been about to crumble to the ground for all I knew. I didn’t care. I thought, at the least, the block of land surely had to be worth something.’

Ms Bradnam contemplated moving into the house herself but eventually decided it wasn’t practical with family and business commitments at the other end of the Gold Coast.

A few years ago, she decided to update the investment property after years of neglect from tenants and originally planned to rent it out again once it was brought back up to standard.

Ms Bradman later decided it deserved a complete renovation and began pouring ‘real money’ into it to transform it into a modern home.

The property was gutted, rebuilt and redecorated from scratch, a massive project which took two years to bring to fruition.

She enlisted the help of daughter Petta to style the interiors.

Owner Jan Bradnam enlisted the help of her daughter Petta to style the interiors. Pictured is the open plan living are on the second level

Ms Bradnam is finally parting ways with the Kandra Avenue home, which went on the market a fortnight ago

It will go under the hammer at an auction on August 12.

‘The house is really groovy, with such beautiful shapes and curves. Whoever designed it had to have been very creative and the views just blow you away,’ she  said.

The home was bought for $1.28million and is now estimated to fetch at least $4.07million, with the potential to surpass $5million, according to Domain.

Kollosche agents Troy Dowker and Rob Lamb have been enlisted to sell the home.

‘Perched high on Currumbin Headland with unparalleled coastal views, this captivating house is nestled into a private nature reserve above Currumbin Beach,’ the property description states.

‘The unique modern coastal home enjoys both bush and beach and presents the ultimate in laidback luxury beachside living.’

Bradnam’s Windows & Doors began as a small business in Hervey Bay 45 years ago and has expanded to 17 showrooms and 1,000 staff nationwide.