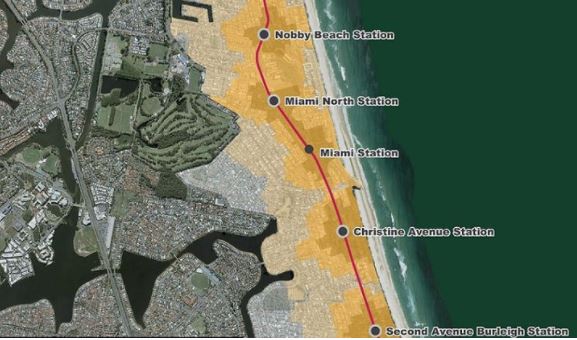 Concept planning is about to start on four light-rail station neighbourhoods on the Gold Coast to meet mounting pressure for more homes.

Nobby Beach, Miami North, Christine Avenue and Second Avenue will be the first focus of the planning process, from September 2021 to early 2022.

The move comes after the Gold Coast City Council analysed the results of the Neighbourhood Framework Broadbeach-to-Burleigh-Heads Corridor survey, in which 77 per cent of respondents agreed with the first set of neighbourhoods.

The first station neighbourhoods to be targeted for growth by the City of Gold Coast.

The results showed tourism businesses, restaurants, entertainment and mixed-use developments would provide the most opportunities for residents.

The station neighbourhoods would be updated in the council’s City Plan in 2022 to 2023, as determined by other amendment packages.

The survey showed the majority of the 1826 respondents were “beginning to recognise in order to protect our environmental areas, concentration of growth was part of that”.

According to the ShapingSEQ outlined in the current City Plan, the Gold Coast needs to provide 158,900 extra dwellings to meet growth obligations by 2041.

Eighty per cent of new dwellings should be in existing locations and 20 per cent in expanded areas of the city.

Apartment sales have increased 97 per cent this year with interstate migration the main driver, despite the nation’s population stagnating.

▲ Helensvale North will be renamed Hope Island Station and would have 179 car parks, lifts and 40 lockable space for 40 bicycles.

The details of the station, part of the $5.4-billion Cross River Rail project, follow on from the Pimpama detailed design released in July. Merimac the next on the list.