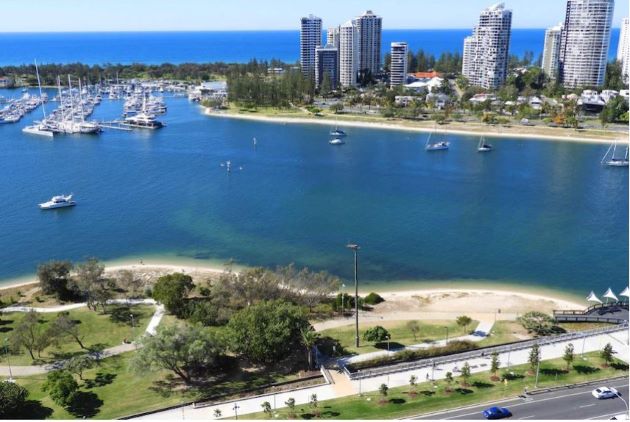 Those who hold on to the dream of living by the ocean may be in luck as Gold Coast property data shows there are still suburbs where houses can be bought for a reasonable price.
Property analytics website RP Data shows there are six Gold Coast seaside suburbs where you can buy a house for less than $1 million.
According to the most recent data, which shows the sales of homes and units from February last year to February this year, units are not the only way to live beachside, with some homes still within reach for the average earner.
Labrador had the cheapest median house price of seaside suburbs with $590,000, followed by Southport at $750,000 and Biggera Waters at $840,000.
Hollywell was also just under $1 million.

Meanwhile, Tugun and Bilinga recorded the most affordable median house prices at the southern end of the Gold Coast at just over $1 million.
Median house, unit prices
Median prices shown. 1,000=1k, 1,000,000=1m. Some figures rounded. Age group is the predominant range in years of age of residents.

Source: RP Data for February 2021-February 2022. * Dec and Aug, no data for Feb
Real Estate Institute of Queensland Gold Coast zone chair Andrew Henderson said suburbs which had older homes were likely to lower the price point and give the everyday earner a chance to get into the seaside market.
Meanwhile, he said newly developed suburbs such as Mermaid Beach and Palm Beach, where it was common to see only beachside mansions, would sit at a higher median price.
So the key: old is gold.
“Also those northern suburbs – Hollywell, Biggera Waters, Labrador – they’re located on the broadwater, not a surf beach, but you can still get your toes in some water,” he said.
“It’s got good infrastructure, transport, so depending on your hobbies, those areas will appeal to different people, perhaps people with boats who want to be on the waterfront.”
He said Labrador and Southport had a good mixture of housing from original timber cottages to large mansions.
Houses on the Gold Coast Broadwater are among the region’s most affordable.(Supplied: Rowley Goonan)
“It does surprise me that somewhere like Labrador – which offers real convenience to the broadwater, convenience to transport, convenience to places such as hospitals and universities – that it is such a good entry price point for somebody to purchase a house,” he said.
Do your research
Mr Henderson said the placement of the Coolangatta Airport could be impacting prices in Tugun and Bilinga.
He said those suburbs also held some older, more attainable homes.

“Tugun and Bilinga they do again offer significantly better value than others have like Currumbin when you’re looking at those median sale prices,” he said.

“So really, if you are looking to get near the beach, they probably do offer a great entry point or a starting point to be able to get into those suburbs and still be a very quick walk to the beach.”
He said the data showed that it paid to do solid research before purchasing a home as prices could vary by hundreds of thousands dollars just a suburb or two away.
“So I would say get out there and maybe look a few suburbs on from where you’re concentrating your search and you might just find that right property just in that neighbouring suburb that still offers very much the similar infrastructure or hobbies or good schools that you may be looking for,” he said.

“There’s a few where you can still get an older house, and that’s where the value sits.

He said areas such as Palm Beach and Currumbin had experienced a lot of gentrification through new housing.
“Somewhere like Currumbin for example, it would be very hard to find an original house. There’s been so much built in,” he said.
“Mermaid Beach is also probably one of those areas where it’s getting very difficult to find an original cottage nowadays.”
Mr Henderson said people hoping to jag a reasonable price needed to act sooner rather than later.

“I would say that those days are numbered, so it’s got to be on the radar of people that are looking to rebuild or do significant renovation, as those suburbs will probably catch up in no time at all,” he said.

“Real estate’s a bit of a funny thing, sometimes you’ll hear all about the southern beach or Palm Beach is always in the media, but then you can get some great value pretty well just down the road in Tugun and Bilinga which is quite surprising to a lot of people.”