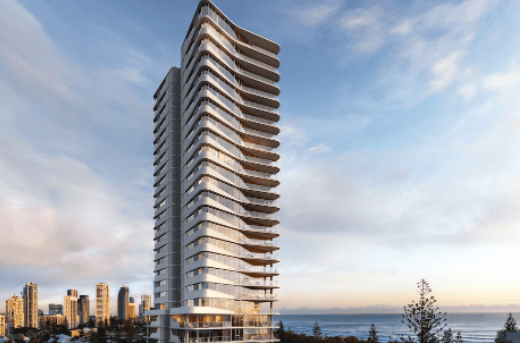 Tower projects could fail to materialise in Gold Coast’s overcooked apartment market, but one developer says strong demand for smaller luxury apartment projects will shore up its half-a-billion dollars in commitments on the Glitter Strip.
Mosaic Property Group is banking on the ongoing success of the Coast, lodging plans for a 29-storey apartment tower at Broadbeach—its sixth project launched in the past four years.
It takes the south-east Queensland developer’s commitments to almost $500 million in the Gold Coast market, with a solid leads book of buyers waitlisted for sister projects Dawn and Bela.
Stock on the Gold Coast market is at an all-time low in 2022 as apartment prices continue to climb. A two-bedroom apartment is now going for an average of $660,415, chalking up a 32 per cent increase during the past 12 months. More property changed hands on the Gold Coast last year than in its history.
And while many developers are scrambling to file development applications ahead of proposed town planning changes, Mosaic chief operating officer Marina Vit believes many of the luxury projects will “fail to materialise”.
She says buyers are becoming more wary of developers who do not have a proven track record of delivering in the Gold Coast’s infamous boom-bust market cycles.
“We believe the Gold Coast apartment market will soften from the highs seen during the past 12 months in terms of volume of luxury sales,” Vit says.
“We also believe that many of the projects mooted to be delivered from Surfers Paradise through to Rainbow Beach over this next two years will fail to materialise. This will in turn keep stock levels much tighter than many are anticipating.
“It will be the developments that can meet the market and deliver against their increasingly specific and evolving needs and wants, as well as reputation, financial strength and delivery capability, that will be most successful … the market trusts that we will deliver what we promise based on our track record.”
Vit says Mosaic is committed to the Gold Coast apartment market with a bank of buyers lining up for its next development at Surf Parade in Broadbeach.
“Even now, we have a substantial list of buyers who have been waiting for us to deliver another development of such calibre in this part of the Coast.
“Buyers are increasingly wary about who they choose to buy from given the considerable ongoing delivery risk concerns with developers that don’t have a long track record of delivering projects through various market cycles.”
▲ Mosaic’s Dawn at Mermaid Beach on Queensland’s Gold Coast.
“There is strong demand for luxury projects of less than 100 apartments from reputable developers with a strong track record. Both Bela and Dawn sold out in record time, with a long waitlist of buyers.
“This is an exceptional, rare site—the best non-direct beachfront site in the area in our opinion, with uninterrupted ocean views to the north-east and south-east over Nikiforides Family Park.”
It’s the second time Mosaic has teamed up with Plus Architecture after collaborating to deliver Dawn at Mermaid Beach.
The 29-storey tower proposed for the 1488sq m site at 146-148 Surf Parade will comprise a total of 96 apartments. Vit says the apartment floorplates will be varied to accommodate different demographics of owner-occupiers.
“We are focused on a highly considered design that will stand the test of time and is respectful to the local context,” Vit says.
“Residences are spacious and highly functional. And of course, there are an outstanding level of exclusive lifestyle amenities on offer within the building, in addition to on-site concierge services.
“We are also continuing to evolve and hone our approach to sustainability across all of our developments. We will be implementing a range of meaningful and measurable initiatives in the design and ongoing maintenance of the building and the homes within.”
It follows a slew of development applications Mosaic has filed across Brisbane and the Gold Coast recently, including an 81-apartment tower in East Brisbane.
There is just three months of apartment supply on the Gold Coast and pent-up demand for apartments on the Gold Coast continues to grow. More than 2500 apartments are expected to come online in the first half of this year according to Urbis’ apartment market research, but the city needs about 6000 new dwellings each year to meet demand.
“If you simply look at projected population growth and housing supply, we are at critically low levels right across south-east Queensland, so the demand will continue as people need homes,” Vit says.
“We have invested just under half-a-billion dollars across six launches within four years. This demonstrates how committed and passionate we are about the region’s opportunity. And we will continue to do so, given the confidence we maintain in this market’s future.”
But as construction costs escalate and the high-profile collapse of builders continues to plague the development industry, uncertainty will likely linger over projects in the notoriously volatile Gold Coast market.