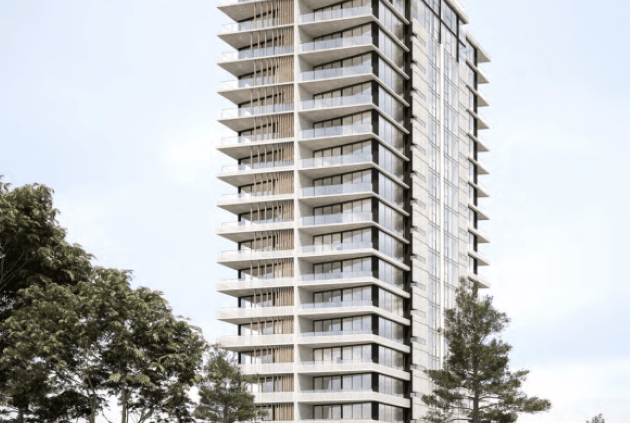 Has the demand for huge apartments weakened on the Gold Coast?
The latest development application by the national development firm Gallery Group suggests so.
They took their Chalk, Surf Parade apartment development to the market earlier this year, offering huge apartments starting at nearly 250 sqm. There were 99 apartments being offered in the 35-level tower.
The new designs by Raunik Design. Image credit: Raunik Design
But now new plans has seen Gallery Group change the mix, and lob off 15 levels to the Surfers Paradise project. Raunik Design has made the amends to the tower, which will now be just 20 levels, and offer 71 apartments, a mix of two and three-bedroom product.
And that is now weighted heavily toward the two-bedroom apartments. There will now be 65 two-bedders and just six three-bedroom apartments, which will be spread across the top two levels.
The move to greater space in apartments has been one of the by-products of the global pandemic, driven by a rise in owner-occupiers flocking to the Gold Coast’s best locations as the working-from-home movement continues.
There’s still residential amenity in the shape of a swimming pool and gym on level two, as well as a rooftop with barbecues and alfresco areas.
Back in March when the old plans for Chalk were given the green light by the Gold Coast City Council, Gallery Group Chief Executive Adam Barclay said the apartments needed to reach beyond the current offerings in the Gold Coast market, focussing on creating larger apartments with well-designed internal layouts connecting seamlessly to spacious outdoor areas.
“The result is a building that achieves new heights in terms of internal finishes, maximising view corridors and providing high quality recreational space in different parts of the building,” he said.
Gallery Group has offices in Melbourne, Sydney, Brisbane and the Gold Coast and has sold over 2000 residences since their inception in 2011, with $1.7 billion in works already completed.