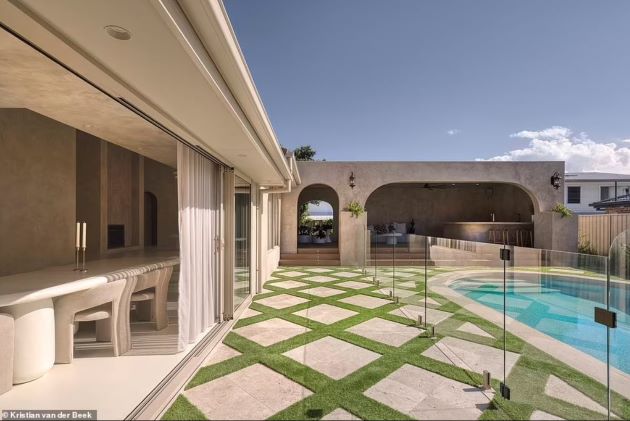 A famous ‘Flintstones chic’ house in Queensland has been listed as a $4,000 a day rental space four months after it was sold at auction for $2.7million.

The one-of-a-kind home in the southern Gold Coast suburb of Burleigh Heads will be available to hire for luxury events, photo shoots, filming and content creation after it captured the attention of thousands earlier this year.

Images of the spectacular pad took social media by storm after it was transformed by owners and renovators Matt Jamieson and Emma Sweeny into an opulent cave-like palace that looks as if it is decked out with floor-to-ceiling marble.

The unique home in the southern Gold Coast suburb of Burleigh Heads will be available to hire for luxury events, photo shoots, filming and content creation

‘Casa Render X’ was made available to rent just last month for $4,000 per day or $2500 for a half day and has most recently been used by influencer Mitch Orval to celebrate his birthday.

His partner and fellow influencer Chloe Szepanowski has also used the statement-making space to photograp her clothing brand.

The unique mansion wowed thousands of online buyers when it was on the market and was sold to a 26-year-old Melbourne man back in March.

According to realestate.com.au, more than 300 people attended the auction at the Gold Coast property where Mr Shao placed the second bid of $2.505 million over the phone via a representative.

During negotiations, Mr Shao made an appearance at the house to increase his offer which eventually won him the rendered masterpiece and he subsequently celebrated the sale with champagne from the vendors.

Mr Jamieson and Ms Sweeny from artisan rendering business Render X bought for $775,000 in 2020 and spent five months renovating it

Little is known about the property mogul however it is understood he recently sold his Melbourne penthouse for close to $15million.

The 26-year-old told realestate.com.au he had to have the house after seeing it on social media.

‘It’s one-of-a-kind, there’s nothing like it in Australia,’ he said.

‘Being young, it’s my kind of style.’

The house is minutes from pristine beaches, and features a fully smooth rendered interior and exterior, very on-trend curves and a light earthy palette.

It was one of the hottest houses in Australia, becoming the most viewed listing on realestate.com.au when it was on the market and drew in hundreds of likes and comments on social media.

Mr Jamieson and Ms Sweeny from artisan rendering business Render X made the original home, which they bought for $775,000 in 2020, completely unrecognisable from the work of art is it now during a five-month renovation.

A cave-like entry way with an arched glass door leads to the show-stopping kitchen, living and dining area inside.

The spectacular kitchen has four-metre high ceilings, Italian marble benchtops and luxe brushed cooper fittings adding to the grandeur of the home and the statement crystal chandelier in the formal lounge room oozes Hollywood glamour.

Back inside the house, the palatial master bedroom has high angled ceilings and a statement built-in bedframe with a curved head in keeping with the home’s aesthetic

The dining area opens out onto the incredible backyard with checkered pavers and grass, a sparkling rounded pool with its own rendered diving board and a covered arched alfresco area with a built-in bar.

Back inside the house, the palatial master bedroom has high angled ceilings and a statement built-in bedframe with a curved head in keeping with the home’s aesthetic.

It also has its own access to the outside bar and seating area, arched doorways leading to a walk-in wardrobe that is every fashion-lover’s dream with built-in shelving and a luxurious ensuite featuring  golden sinks, taps and mirrors a huge free standing bathtub and open shower.

There are also three more bedroom with bronzed glass built-in robes and a second lavish bathroom with a high end fit-out.

Images of the house on social media drew in hundreds of impressed comments from users who love the ‘seriously stunning’ style and likened it to The Flintstones.

‘Looks like something from Greece – wow. Amazing’ one person said.

‘Such a cool and unique look. Love the big palm trees!’ commented another.

‘Wow. What an amazing home. Reminds me of the flintstone era. I love it! This is what you call a home!,’ wrote a third.