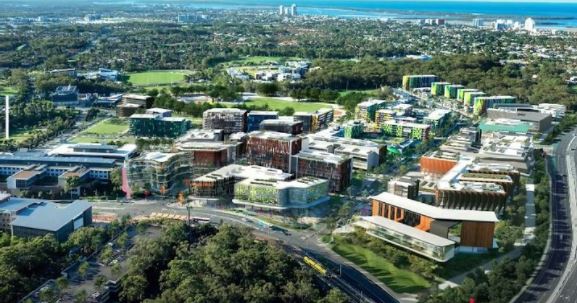 Sanctuary Early Learning Adventure and Griffith University committed to tenanting the $80-million building within the renamed Lumina Precinct in Southport, at the corner of Hill Street and Stanley Lane.

The Proxima building features commercial space across eight-storeys and two-levels of basement parking, in a design which has changed markedly since it was lodged in 2020.

The Brisbane-based developer has worked on a series of health and early learning focused projects in the past, with Proxima bringing this experience together.

The commercial building will provide space for 400 children and an early learning centre with in-house access to allied paediatric health and research professionals.

▲ An early artist’s impression of what Lumina could look like in the future alongside the Smith Street Motorway and Griffith University.

“We launched the Proxima development with the plan to create a children’s centre of excellence and already the building has around 65 per cent of its space committed,” Evans said.

“The response from the market has been outstanding. We are in final negotiations with further key tenants and are receiving strong interest from other health-related businesses.

“It’s exciting to see construction commence today, and we expect the building to be complete by the end of 2022.”

Since the Queensland Government received handover of the land in 2019 three land sales have been finalised. 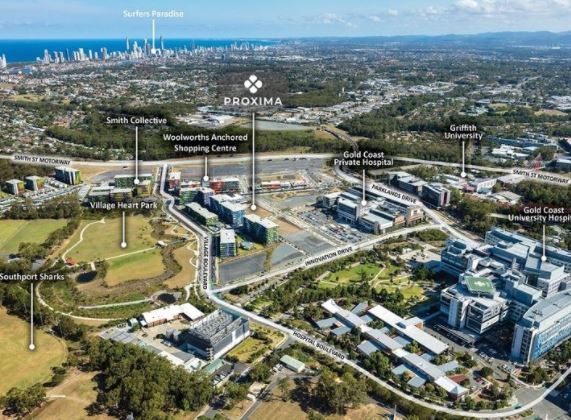 Four further sites are under in-confidence negotiations and two other sites were earmarked for investment by the Queensland Government to support small to medium enterprises.

The former athletes village buildings were transformed into more than 1,200 dwellings and commercial space after the Commonwealth Games including a Woolworths and various restaurants called the Smith Collective.