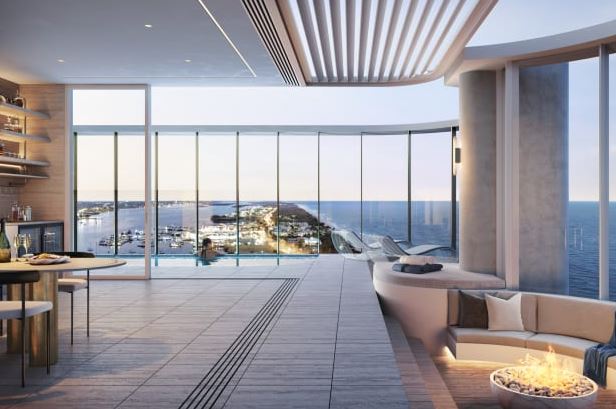 Andrew Erwin, of NPA Projects, said the customizable kitchen is one of the key drawcards for people buying in The Monaco

The luxury Main Beach apartment tower The Monaco is set to begin its construction next month, with the biggest drawcard for buyers being the customisation on offer.

For Helene Omeros, whose family owns and runs the multi-award winning Omeros Brothers Seafood Restaurant at Marina Mirage around the corner, and her husband Charles Millard, it was the option to completely customise their kitchen.

The couple are downsizing after buying a three-bedroom, three-bathroom apartment on the 11th level of The Monaco, which is being developed by local developer Ignite Projects and designed by Rothelowman.

“We’re a close family and we spend a lot of time cooking and eating together so having the ideal kitchen is so important to us,” Omeros said.

Omeros Brothers is a Gold Coast icon with the Omeros family having operated some of the country’s leading restaurants for more than 40 years.

Millard said it is very important as the kitchen lends itself not just to the practicalities of cooking but entertaining as well.

“The kitchen is always the focal point of entertaining at least for the first hour after guests arrive,” he said.

“That’s why we want to be interacting with our guests rather than having our backs to them while we use the cooktop and ovens. “We find it works best if the ovens and cooktop are built into the island bench facing the living area so that way the entertaining flows perfectly.

He said key features for the couple will include gas cooktops, two fridges and two over-sized ovens as well as a generous butler’s pantry. Omeros said they will be sure to consult her dad and brother on the design on the kitchen before it gets built.

Andrew Erwin, of NPA Projects, said the customizable kitchen is one of the key drawcards for people buying in The Monaco.

“People love working with our concierge team and the kitchen designers to design the kitchen they’ve always wanted but until now been unable to have in an apartment,” he said.

“Combined with the fact it is a boutique building with a recreation space complete with a 24-metre heated pool alongside a private dining area and virtual golf as well as stunning views from every apartment adds up to The Monaco being the complete package.”

Omeros said, as well as the customizable kitchen option, the amazing location and unbeatable views incorporating the Broadwater and ocean were key reasons for purchasing in The Monaco.

“We don’t get Broadwater views at our current building so that’s a lovely change. The Monaco is also close enough to walk to my job at the family restaurant,” she said.

Millard said he loves the “village vibe” of the suburb.

“People are so nice here in Main Beach. It is a more mature area, but we do have younger people moving in.

“The suburb has also historically held its value better than Broadbeach and Mermaid Beach during past downturns. We’re now getting national press that Main Beach is where there is huge demand and not enough stock and that will keep going into next
year.”

The Monaco is a 24-level north-facing apartment building with a collection of luxury full-floor and half-floor residences at 2-4 MacArthur Parade, Main Beach.

Three-bedroom, three-bathroom apartments, with two multi-purpose rooms, are priced from $4.45 million with construction by McNab due to start this September.