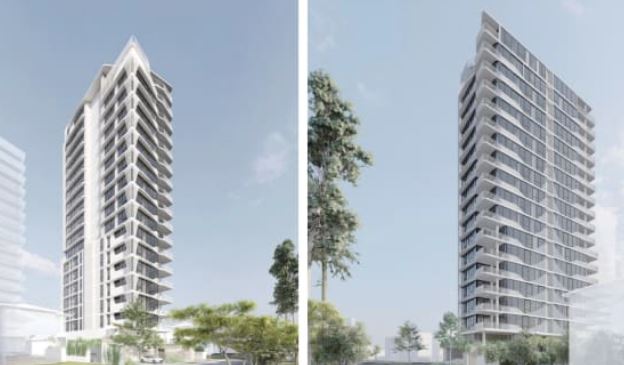 The Brisbane-based developer Marquee Developments are making their first play on the Gold Coast.

Their latest plans submitted to the Gold Coast City Council will see a luxury high-rise tower developed at 17 Federation Avenue in Broadbeach, their first in the central Gold Coast suburb.

There will be just 22 apartments across the 20-level, 62 metre tower, crowned by a massive two-level penthouse.

Levels two to seven will home two apartments per floor, then from level eight upwards will be nine whole-floor, four-bedroom apartments, each with over 290 sqm of living space and a media room. The building is oriented so the balconies capture views of the ocean to the south-east, and south-west to the hinterland.

The four-bedroom penthouse spans the top two levels. The bedrooms are located on the first level, then stairs from the library space lead to the upstairs living areas. The open plan kitchen and living area opens to a 30 sqm balcony, while a second lounge area opens to a 70 sqm terrace with its own private pool.

Each of the three bedroom apartments will have a master with walk-in wardrobes and balconies starting from over 16 sqm.

The ground level will offer residents 230 sqm of communal space and amenity, including a swimming pool and spa, dining and barbecue area and a lounge /cinema room.

Marquee, not to be confused with Marquee Development Partners who exclusively operate in the area, secured the 632 sqm site, mid-way along Federation Avenue, between the intersections of Australia Avenue to the north and Queensland Avenue to the south, early this year for $3.69 million. Currently on the site is the mid 1970s apartment building Marmadua, a three-storey walk up with basement parking underneath.

Marquee’s track record is a successful one in Brisbane.

Founded in 2012 by Nick Madden and John Langford-Ely, Marquee’s patch has primarily been in the luxury townhouse space just outside of the Brisbane CBD.

The overall form of the proposed development has been developed through considered analysis of the context and character of the site and its surroundings, and the intended city form for this urban neighbourhood focused on the Principal Centre of Broadbeach and within the Light Rail urban renewal corridor of the City.

The tower form and materiality combined delivers a slender tower with horizontal façade treatments, extensive balconies with recessed glazing lines and materials (including colour palette) that presents a high-quality architectural finish, enhancing the visual interest and character of the built form in its context to deliver a desirable city form outcome and a positive addition to the streetscape character Federation Avenue.

The façade is broken up by generous balconies that are oriented to the west overlooking Federation Avenue and the hinterland backdrop, and to the east towards the ocean.