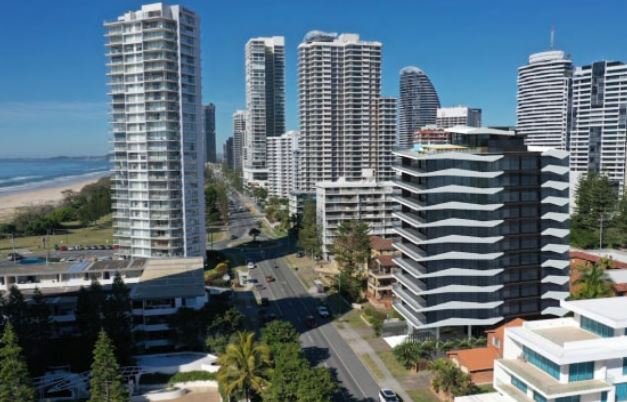 Despite the unlimited heigh limit at 131 Old Burleigh Road, the local Dovrat family have opted for a more boutique tower, aimed at the owner-occupier or downsizer

Despite offering developer unlimited height restrictions, some developers in the Gold Coast suburb of Broadbeach are opting for more boutique projects, as the demand for bigger apartments at higher price points continues to heighten.

The newest plans will see a boutique block of just 10 full floor apartments built, one of which, the penthouse, which will span two levels.

Despite the unlimited heigh limit at 131 Old Burleigh Road, the local Dovrat family have opted for a more boutique tower, following in the footsteps of the likes of Little Projects Co. and Marquee Developments.

The Old Burleigh Road apartments will have 288 sqm of internal living area, with a further 58 sqm of balconies, including an east-facing 43 sqm balcony off the open plan living, kitchen and dining area. Each of the three bedrooms will have a walk-in wardrobe and an ensuite. There will also be a multipurpose room.

The whole floor apartments run to level 12, where the two-level penthouse starts. That will have a private rooftop terrace with its own wet edge swimming pool, dining area, outdoor kitchen, lounge area, and a sauna.

The resident amenity will be across levels one and two and will include an entry lobby, a swimming pool, a private dining space with kitchen, and a gym.

The town planning report by Planit Consulting stated the proposal by Raunik Design is of high architectural quality, expressing a luxurious and contemporary design through bold horizontal elements that complements the coastal character of the local area.

“The façade is comprised of naturally forming elements such as glass and concrete and incorporates black aluminium frames and horizontal battens. The elegant concrete façade wraps around each floor floated by tinted glass allowing for natural light in addition to shading and privacy and unobstructed views in every direction.

“The use of glass on the ground and mezzanine level activates the streetscape creating visual interest on a pedestrian scale. The built form presents low site coverage and substantial setbacks at the first two levels to create a legible entry and contribute positively to the streetscape.

Given its proximity to Surfers Paradise, traditionally Broadbeach has been a magnet for high density apartment towers, some with hundreds of apartments. But that’s left a gap in the market for the downsizer or owner-occupier, who ranks space over location.

One of the next boutique projects to launch is Aperture, just 29 full floor apartments at 20 Mary Avenue. That’s being developed by Little Projects Co, who recently sold out their $200 million Signature Broadbeach tower nearby.

They’ve had the award-winning architect Elenberg Fraser design the building.

Hayes Anderson Lynch Architects have drawn up the plans for the 62 metre building which willl have six two-bedroom apartments, six three-bedroom apartments and 10-four bedders. It will also be crowned by a two-level penthouse.