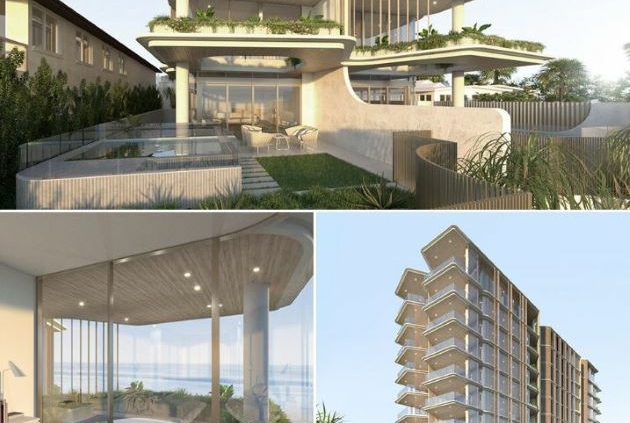 Plans have been filed for a 10-storey apartment tower as development activity takes off along the Bilinga beachfront strip near the Gold Coast Airport.
Under the proposal, the 1246sq m site at 301 Golden Four Drive—currently occupied by two single-storey homes—will be redeveloped to accommodate 17 apartments.
It will comprise 14 three-bedroom apartments and two two-storey, four-bedroom apartments with private courtyards and swimming pools, each ranging from 260sq m to 372sq m.
Topping the boutique tower will be a 420sqm four-bedroom penthouse with an 88sq m balcony and private cinema, gym and outdoor terrace with a swimming pool.
Communal recreation space is planned for the lobby level and two of the apartments will have direct access from private courtyards to the oceanway and beach.
The beachfront tower scheme has been designed by Brisbane-based Gatehouse Architects for client Dale Nicholls.
It is earmarked for a site with a 23m building height designation but is seeking a 50 per cent uplift under the provisions of the strategic framework to 34.5m.
According to a submitted design statement, the development “reflects the elegance and architectural vernacular of the Gold Coast coastline”.
▲ Renders of the proposed Bilinga beachfront tower for 301 Golden Four Drive.
“The design draws in its natural surroundings and blurs the threshold between interior and exterior spaces,” it said.
“The vision is to create an address where the building and its occupants embrace the natural local environment synonymous with living in a modern Queensland beach house.
“The buildings form reflects the soft curves formed by waves hitting the coastline and the ripples formed by wind-blown sand.”
Its use of timber finishes, natural stones and soft tones and textures is designed to reinforce coastal living architecture in its context with screens focusing occupants’ outlook to the ocean and maintaining privacy from neighbouring properties.
“Vertical integration of the landscaping throughout the tower and podium break up the buildings scale and bulk and create a dynamic relationship between solid and soft as seen in the coastal headlands.”
Nearby, Brisbane-based developer Cielo Group has lodged plans for a 10-storey boutique apartment tower in Bilinga, its second project on the Gold Coast.
It is proposed for a 1000sq m beachfront site at 90-92 Pacific Parade and will offer 18 three-bedroom apartments—three per level across the building’s lower levels and two per level across its upper levels—as well as a single four-bedroom penthouse.
It will be topped with a rooftop deck with plunge pool, gym, dining room and amenities.
Cielo Group also has plans for a similar six-level project on a 500sq m site nearby at 55 Golden Four Drive comprising five full-floor, three-bedroom apartments and rooftop amenity.