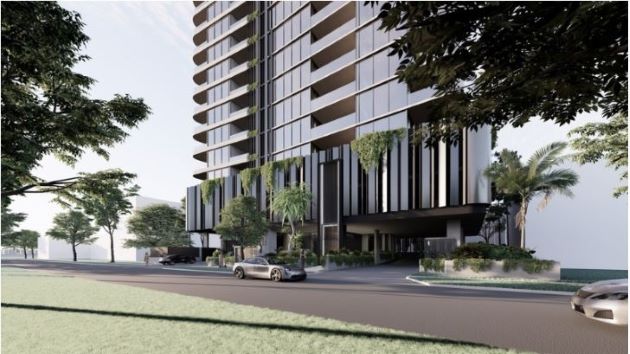 Gold Coast developer Aniko Group has filed plans for a 22-storey residential tower on Chevron Island as demand for high-rise living in the once sleepy island neighbourhood continues to grow.
The 74m tower, which includes 102 apartments and parking for more than 150 vehicles, was lodged with  the Gold Coast City Council last week.
The tower would become one of at least 14 mid- to high-rise developments currently approved or under construction on the island.
The $105-million tower, designed by Plus Architects, sits on three adjoining lots of 1518sq m in Weemala Street in the south-east pocket of the island.
Aniko has been quick to move on the site, which it acquired late last year, for a reported $5 million.
“We are looking to transform this site into a residential offering that will appeal to a broad range of buyers,” Aniko managing director George Mastrocostas said.
“Our aim is to create large living spaces and deliver a range of superb resident amenities that align with the convenience of the Chevron Island location.”
The development will include nearly 550sq m of communal open space on the rooftop, including pool and spa, barbecue and dining areas, lounges, a gym, yoga facilities and private offices.
Real estate momentum has picked up on the Gold Coast since Christmas, with developers saying that despite premium pricing, projects are selling fast.
Once a goat and cattle farm, sea-change buyers have descended on Chevron Island, nestled between Surfers Paradise, the Southport Golf Club, and the $60-million Home of the Arts (HOTA) precinct. Developers have snapped up the limited land on the island.
Brisbane developer Citimark Properties’ 17-storey Mirador project on Mawarra Street is 70 per cent sold, with construction expected to be completed before the end of 2023.
A spokesperson for the developers said sales have gone well with just 26 apartments still available.
▲ A render of Aniko’s tower proposed for the Chevron Island site.
Chevron One, which is due for completion late 2024, has showrooms on the Gold Coast, but also on Toorak Road, Melbourne, to take advantage of big city interest in their development, which has in part been drive by the pandemic.
Chevron One is the only 41-storey tower likely to be built on Chevron Island as a planning permit was granted before changes to development height restrictions.
​​Currently, the City of Gold Coast restricts building on the island’s outer perimeter to two storeys or 9 metres.  Inland areas have no height restrictions.
However, a major update of Gold Coast’s City Plan, which would see building height on Chevron Island restricted to 33m, or about 10 storeys, is before the Minister for State Development, Infrastructure, Local Government and Planning for approval.
“The height of developments is usually governed by the number of properties you can amalgamate,” Zone Planning Group director David Ransom said.
“And then it comes down to the economics of construction … things like car park spaces.
“Basement carparks are expensive to build.”
Ransom said the number of development applications for Chevron Island reflected the sense of urgency developers felt over the proposed change in height restrictions.